Marcus Biesecke was trained in jewelry making at IVO Goldschmiede as an apprentice on the bench from 2005 to 2009. In 2010, he enrolls at the University of Art and Design Burg Giebichenstein Halle. He receives his diploma in fine arts & jewelry in 2016. During that period, he spends a year at Geijittsu Daigaku Tokyo, the University of Tokyo. Since 2014, he is the head of the goldsmith studio in Halle while running his own studio. He took part in exhibitions in Japon, in the Netherlands and Germany. More recently, his work was selected for the prestigious Schmuck 2018 in Munich.
Marcus Biesecke works on different concepts and materials according to his collections. deals with symbols of neutrality and nonexistence, focusing on the long tradition of portraits in jewelry history. Raindrops rolling on the window, engraved on reflective glass, the pins of the collection awake a memory, a moment of nostalgia. 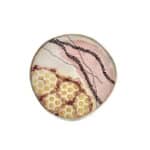 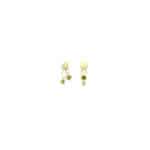